Sustaining committment to your business

Does your business have a strategy?

Sustaining committment to your business 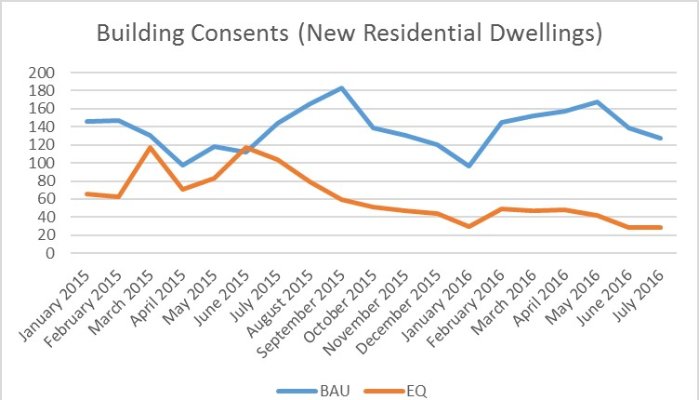 Council has declined dramatically, according to an 18-month review of figures. Just 28 consents issued in July 2016 were recorded as earthquake recovery, down from a high of 117 in both March and June 2015.

Similarly, consents issued as “Business as Usual” are also showing a decline. April 2015 saw an unusually low number of just 71 BAU consents with January 2016 showing another low of only 96 consents issued.

The total number of consents for 2015 dropped under 2,600 from a record high in 2014 and the number issued to July 2016 is just over 1,200 for the 6-month period. It is expected that the market will continue to decline over the next six to 12 months.

It’s not surprising that Earthquake Recovery rebuilds are coming to an end, but as the residential construction sector in Canterbury continues to tighten, builders and sub trades are starting to find it tougher to secure work.

The larger group home builders are still dominating the consents being issued. It is noticeable that the number of “spec houses” being built has dropped significantly, but this still accounts for as much as 20% of all consents.

Companies are encouraged to ensure that they price work correctly and monitor costs closely. Efficient administration systems and good organisation procedures will help businesses to manage through this period.

There has been a noticeable increase in marketing and advertising activity across all forms of media as companies compete for market share. However, companies are urged to monitor the response rates from any marketing activities closely to ensure that they are creating the maximum impact at the lowest cost.

This site uses Akismet to reduce spam. Learn how your comment data is processed.